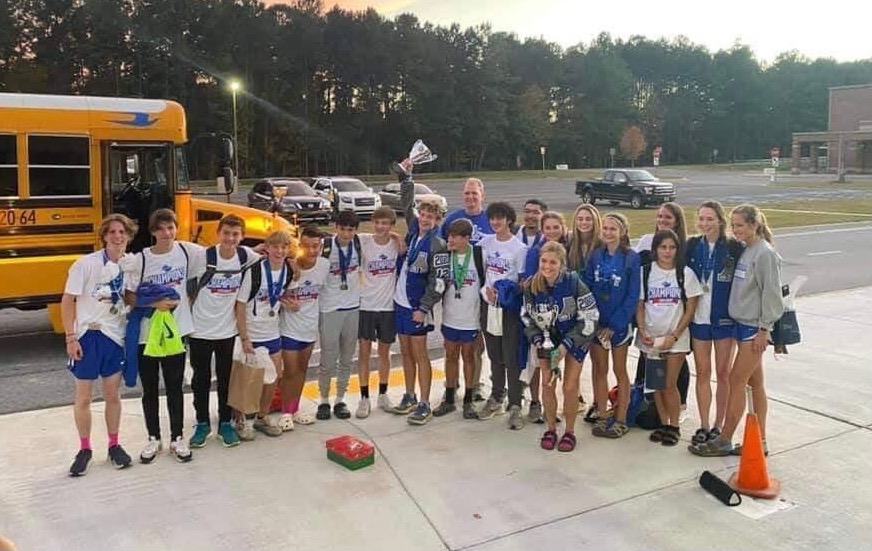 The state race is the culmination of all the hard work put in throughout the year. Every race prepares you for region, the ticket booth to State. Chloe Hakala, senior, said, “[State] is such an indescribable experience.” Leading up to the State Race, there were many articles on milesplit.com such as, “Armuchee Gets 4 Wins?” discussing Armuchee High School’s XC team’s chances and their competitors’ chances for an upset. On race day, however, Armuchee proved their competition was nowhere close to them. The young man from Ace Charter due to beat Armuchee’s Trace Harris’s top competitor was left in the dust by the now State Champion. Armuchee’s senior Jesse Harnandez was sitting in the 7th spot for Amruchee’s Varsity team at Region but surprised many when he outran one of the top 5 at state, taking his spot on the scoring sheet for his last race. Peyton Alford, senior, said, “Going into the race, I did not think that I would be our number five.” Peyton came in at 5th, being one of the most essential scorers for the girls team, sealing the final score at 67 points, ensuring their victory.

The State race is the big competition everyone everywhere sees. Matthew Campbell, junior, said, “So it’s big, but it’s not scary because you’ve got your people behind you.” Countless schools from many different places and classifications are there watching the race, hundreds of spectators stand to watch the battle to the finish. Matthew Campbell also said, “It feels like all season you’ve been working toward one thing, and now everyone’s you know, here in the final moments to support you.”

The final hill at state seems to be the way history describes the colosseum, loud with noise, your name on the wind, but it doesn’t matter because you’re so zoned in that you can’t hear anything but your footsteps, can’t see anything but that blue line at the bottom of the hill. When these boys and girls came around the bend and started down the hill to the finish line, they had determination in their eyes as their gaze was glued to that finish line.

Trace Harris, junior and state champion, said, “Kinda felt like it was a really good moment in something to really experience because it[winning] rarely happens.” Trace Harris’s time set the tone for the rest of Armuchee’s team, leading to their 1st State Championship Title. Marissa Kimple, sophomore and state champion, said, “I really loved how we swept it[State], It was cool how we worked together as a team to win.” Marissa surpassed Shelby Green, last year’s State Champion, and led the girls’ team to their 2nd State Championship Title.

Armuchee will be losing valuable and loved teammates this year. They have carved the pedestal Armuchee’s Cross Country team now stands upon. Next year’s team is fully expected to raise that pedestal higher and into the future. They have big shoes to fill and all the strength to do so.