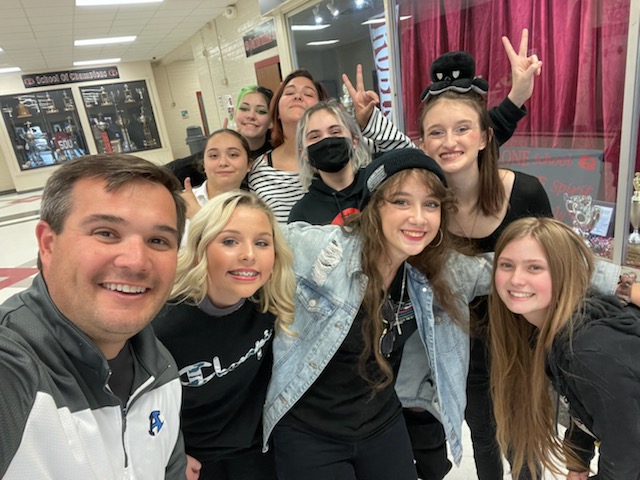 Drama club members at Armuchee High School had been preparing and refining their one-act play throughout all of fall. Their efforts proved to be fruitful when they won their competition at regionals. After their winning performance, students celebrated their victory alongside their teacher, Mrs. Lejeune. With this excitement, however, also came the oncoming feat that is state. Since that advancement, drama had been upping the ante by rehearsing harder than ever.

The play, called The Audition, is a production about a perfectionist stage manager casting a showing of the ancient Greek tragedy, Medea. Through this audition process, we see five other characters: Kelley, a well-mannered girl who doesn’t know how to stay off of spike tape; Jules, a bubbly, theatrical actress; The-Artist-Formerly-Known-as-Question-Mark, a mysterious mime; M.R. Irving, an aspiring actor with a secret; and finally, Robin, a tormented backstage crew member who cannot catch a break. Despite the wild diversity between all of these characters, our drama members portrayed them excellently.

According to many, these students did an amazing job portraying the true comedic effect of the piece. Student, Kaili Wheeler (sophomore) said “I loved their show. It was hilarious, and the way our actors and actresses performed added to the humorous aesthetic immensely.” Actor, Carlie Wolfer (freshman), said that she was very excited for state, and looked forward to performing the show they had all worked very hard on. It’s safe to say that the entire group felt the same way about the oncoming trip.

While we did not place in the top four at state, our cast, crew, and drama instructor were all very happy to have made it there, and had an excellent time meeting fellow drama students from schools around the state. Two of our actors, Carlie Wolfer and Tray Main, won an Outstanding Cast Award for their eye-catching acting. Their final performance was one of their best, featuring well-done projection and comedic timing. Our actors and crew even received compliments from Principal Rhodarmer after their state performance. While we did not win a material award, the trip was an overall success.

Drama club is now looking forward to other things, like the Floyd County musical production, The 25th Annual Putnam County Spelling Bee. Our students anticipate the upcoming auditions for said show and to the variety show they will have at the end of the year. We cannot wait to see what else our students will contribute. Thank you to Armuchee High School drama club for representing our school at state: Paige Tessin, Nadia Abshire, Tray Main, Carlie Wolfer, E Martinez, Sophia Brown, Makayla Lockheart, Dallon Smith-Haynes, and Mrs. Lejeune.