Basketball Builds the Skills of Underclassmen for Future Success 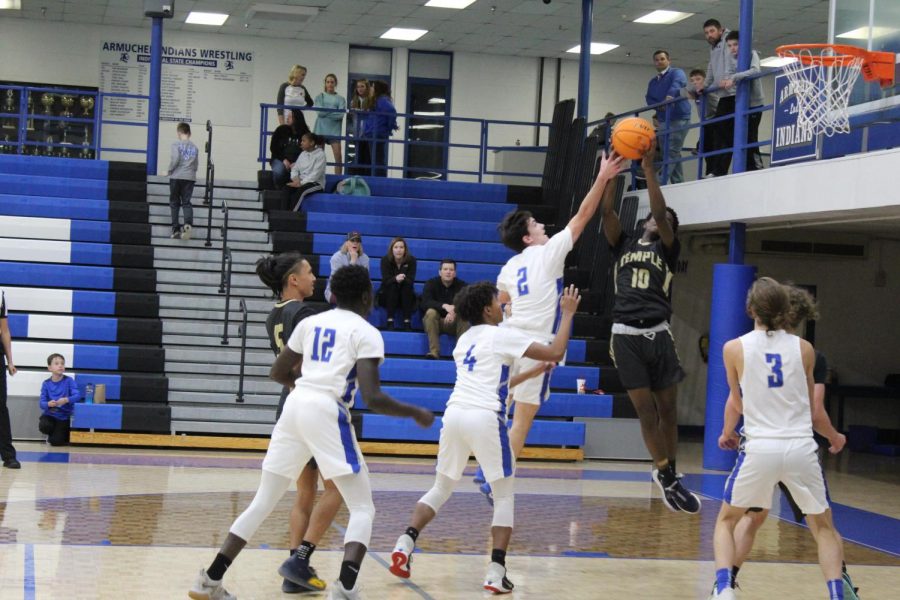 Chandler Cook, junior, stretches with all his strength to get the ball in the hoop.

The Varsity Indians basketball teams started the new season with new players and a new gym. The Varsity Lady Indians team was made up of two seniors, three juniors, two sophomores, and four freshmen. The varsity boys team included four seniors, six juniors, and two sophomores. In the summer, the teams began preparing for the winter season by attending camps and conditioning. Grace Stanley, senior, said, “This is the closest bonded team I have ever been on. We are all best friends and that is so important.”

The head coach of the boy’s varsity basketball team is History teacher, Coach Clint Decker. Coach Decker has been coaching at Armuchee for nine years. He has been the varsity head coach for 3 years. Coach Decker said, “This year’s team seemed to be a group that genuinely enjoyed being around each other.  The team chemistry made this group an enjoyable experience.” The boy’s basketball team faced adversity and struggles throughout the season. Kody Manikas, senior, said, “I want to make sure I am always a good leader and a good teammate.” This season the team traveled to various camps to play against different levels of competition. Along with team training, some teammates worked on getting better personally. Senior, Jax Gribble said, “I have prepared for the season by going to the gym and putting up a lot of shots. I have been working hard to make sure I give my best all season long.” Gribble has played basketball all four years of high school. Senior Night, and the end of the season, came too soon for the seniors. Manikas said, “I had a really good feeling; I wasn’t crying, but I was sad. It was one of my last times on the court.” Luke Mayhall said, “My emotions were everywhere, but once we started playing, I was focused because I knew what we had to do.” From sickness to injury, the team pushed through and overcame obstacles. This year the team had the motto of, “the next man has to step up.” Coach Decker said, “This year we faced many challenges.  We had several players injure themselves throughout the season. We also had sickness that began going through the team in January. We had one player get mono, had many other players come down with the flu late in the season. Trying to keep everyone healthy was one of our main goals the last few weeks of the season.”

The Varsity Lady Indians head coach is Michelle Arp. She has been coaching basketball for 14 years. She has been the head coach for 9 years. She said, “This year’s team is a special group of young ladies. Overall we wee a very young group with 11 underclassmen on our team. Over the season our team grew and improved to be able to compete in a very competitive region. I love the hustle they bring to games always diving for loose balls and playing fast in transition.” The Varsity Lady Indians team made history this season with a win against Model. Julia Williams, junior, said, “It was a great feeling because we have not beat Model in seven years, so we were all crying after the game.” Model has always been the biggest rival of AHS so this win meant so much to the team and the community. Arionna Dozier, junior, said, “The win was honestly the best feeling I’ve had in a long time because we actually worked together as a team.” Both seniors have been playing basketball for most of their lives. Stanley’s advice to younger players is simple. She said, “Be positive and enjoy every moment.” Katie Shinholster, said, “I would tell underclassmen don’t let the love of the game slip away from you.” Both teams faced struggles and adversity. However, they both overcame and built a bond stronger than any other.