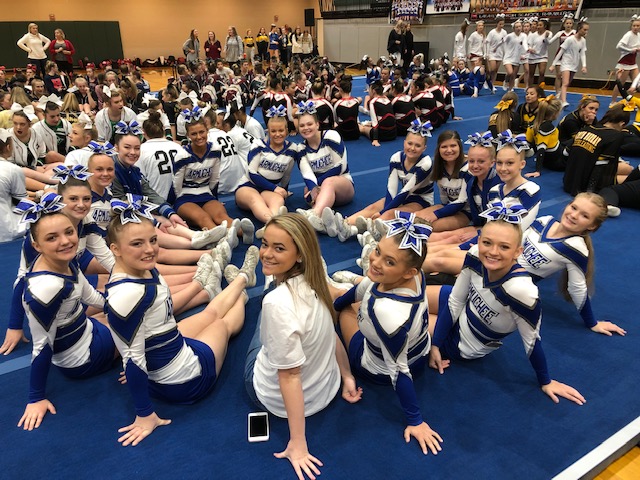 On November 15-16, the Competition Cheer Team competed at the Regional State Championships in the Columbus Civic Center. Overall, the team placed 2nd in State. Coach Stamey had this to say, “They did awesome. The routine couldn’t have been any better. They left the mat knowing that they did everything they could’ve done, and felt really good about it.” The two-in-a-row win helped calm their nerves, and they felt confident about heading to Regions. Also, the three state titles, two of which are also back-to-back helped them feel prepared. Nevertheless, they will keep practicing and try their hardest.

“We never expect a victory. We prepare and pray for a successful and safe routine,” said Assitant Cheer Coach, Jennifer Dougherty. So, when the Competition Cheer Team won first place at their competition at Sonoravillle High School, it was both exciting and shocking. Winning at Dalton High School with only one error in the routine, made this win exceed their expectations. Varsity Coach, Kelli Stamey said, “It was a great feeling to win our first competition.  We have had 2 season-ending injuries so this was really the first competition that we were able to do the whole routine and then to also win first was amazing.”

They prepared all throughout the summer, conditioning 2-3 days each week since June. The routine could be no longer than 2:30 minutes. They cut it close with 2:29 minutes, but it was worth it. The routine was one of the most complex and difficult ones in Northwest, GA and they even added a high energy dance number to end it. Motivation is key in this sport, and it one of the things required to do well in it. Coach Dougherty said, “We motivate our team through devotion time each Monday. We talk about our goals and pray together over our team for the next week. As coaches, Coach Stamey, Coach Allen, and I remind our athletes on a daily basis that they can do anything, including winning a 3rd straight championship, that they put their minds to.” After the secured victory and awards were given out they celebrated with a group hug and many pictures. 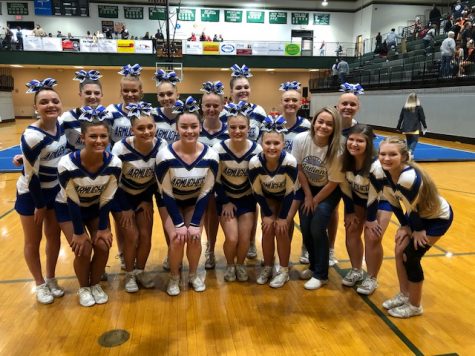